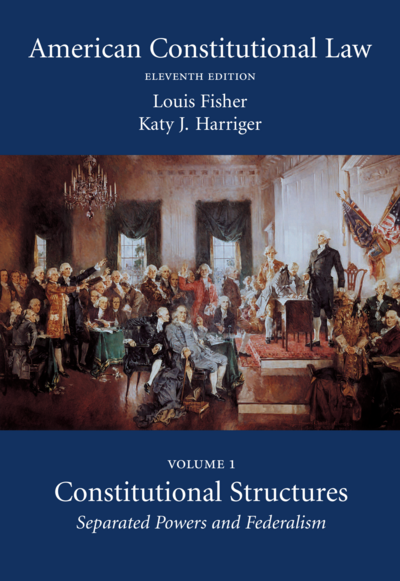 This book, in addition to analyzing and including excerpts of court decisions, highlights the efforts of legislatures, executives, the states, and the general public to participate in an ongoing political dialogue about the meaning of the Constitution.  It therefore rejects the idea that elected leaders and the public must passively receive and obey a series of unilateral and final judicial commands.  The book covers all new developments in case law, congressional statutes, presidential policies, and initiatives undertaken by states under their own constitutions.  Included are readings not only from cases but congressional floor debates, committee reports, committee hearings, presidential vetoes and statements, opinions of the Office of Legal Counsel in the Justice Department, state activity, Federalist papers, and professional journals.

After introductory chapters on constitutional politics, the doctrine of judicial review, threshold requirements, judicial organization, and the process and strategy of decision making, the book focuses on these substantive areas: separation of powers (domestic and foreign affairs), federal-state relations, economic liberties, free speech and free press, religious freedom, due process, search and seizure, race, equal protection, privacy, and political participation.  The book concludes with a chapter on efforts to curb the Supreme Court.  Professors may choose between the one-volume casebound book or two paperbacks: Volume 1 on “Constitutional Structures: Separated Powers and Federalism,” and Volume 2 on “Constitutional Rights: Civil Rights and Civil Liberties.”