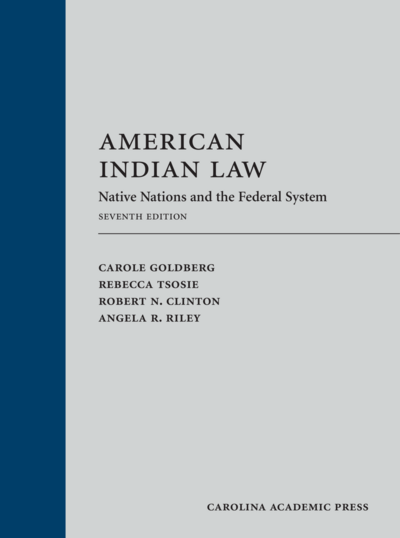 Native Nations and the Federal System

American Indian Law: Native Nations and the Federal System, now in its Seventh Edition, surveys the tribal-federal relationship. It is primarily devoted to the study of federal Indian law, i.e. the federal law developed to regulate the tribal-federal relationship. This book pursues a broad perspective, merging jurisprudence, history, comparative law, ethnology, and sociology to bring meaning to the tribal-federal relationship. The authors do not merely present the 'black letter' law as is, but also provide the historical, cultural, and jurisprudential tools for a reader to critically analyze the current state of legal doctrine in federal Indian law. The book provides a wide-ranging inquiry into the role of law and legal processes, both domestic and international, in protecting or frustrating the desires for political and cultural autonomy of various racial, cultural, religious, or national subgroups within a society.

The authors have incorporated insights from an array of new intellectual developments in law and related fields, including critical race theory, the new legal realism of the law and society movement, empirical approaches to law, law and economics, indigenous methodology, legal pluralism, and neoinstitutionalism. The aim is to inform future practitioners and advocates about pragmatic, political possibilities and constraints, complementing theoretical and critical perspectives that may challenge the current state of affairs. At several points in the casebook the authors emphasize intergovernmental relations through cooperative agreements and institutional innovation. The cross-currents and inconsistencies of such legislative developments, case decisions, and intellectual ferment present formidable challenges to anyone who sets out in a casebook format to capture the depth and richness of the intellectual efforts of tribal people and others, including judges, legislators, lawyers, and academics, to build a coherent body of Indian law.

The book serves double-duty as a research sourcebook in the field of federal Indian law and can be used as a resource for students long after graduation.