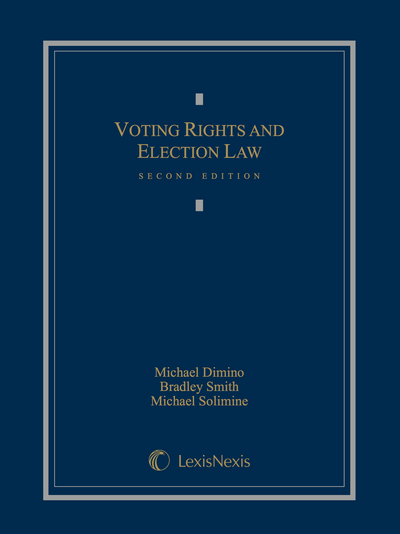 Voting Rights and Election Law is a law school text book covering the law surrounding the electoral system. Coverage begins with voting qualifications and barriers to exercise of the franchise. The book covers the authority of the courts to remedy violations of the right to vote. Other topics include the One/One Vote Doctrine under the Federal Constitution and the effects of the Voting Rights Act. The book also covers the role of political parties and term limits for federal and state office. Campaign finance and political speech each receive treatment. The book concludes with a chapter on methods for remedying errors in elections.

In Chapter 1 students examine questions surrounding the constitutional right to vote and legislatures’ power to restrict the classes of persons entitled to the franchise. The remainder of the text proceeds chronologically through the electoral process, from districting, with its issues of one person, one vote and the role of race under the Constitution and the Voting Rights Act, to the place of political parties in the electoral and constitutional structure, to limitations on ballot access, to the First Amendment’s protection of political speech, including an in-depth treatment of campaign finance, to rules governing the voting process itself, to vote-counting, to remedies for elections that have gone wrong.

Compared to other casebooks in the field, Voting Rights and Election Law emphasizes the texts of leading court opinions rather than commentary and political-science research. The book focuses on the legal principles and language adopted by courts in deciding election cases, rather than competing political theories about elections and democracy. Students are, however, encouraged through notes and questions to examine and question the empirical assumptions and theoretical premises behind the opinions.

Some of the new cases included in this Second Edition are: