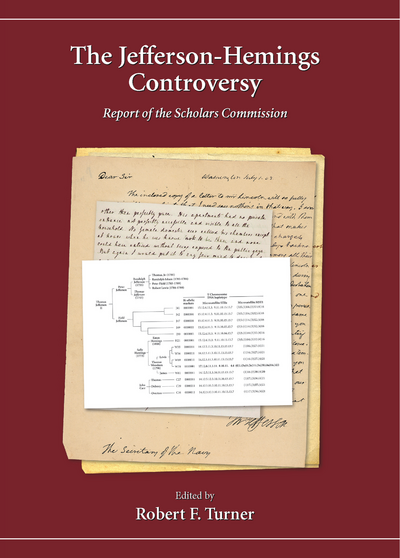 The Jefferson-Hemings Controversy: Report of the Scholars Commission

Report of the Scholars Commission

In 2000, the newly formed Thomas Jefferson Heritage Society asked a group of more than a dozen senior scholars from across the country to carefully examine all of the evidence for and against the allegations that Thomas Jefferson fathered one or more children by Sally Hemings, one of his slaves, and to issue a public report. In April 2001, after a year of study, the Scholars Commission issued the most detailed report to date on the issue.

With but a single mild dissent, the views of the distinguished panel ranged from "serious skepticism" to a conviction that the allegation was "almost certainly false." This volume, edited by Scholars Commission Chairman Robert F. Turner, includes the "Final Report"—essentially a summary of arguments and conclusions—as it was released to the press on April 12, 2001. However, several of the statements of individual views—which collectively total several hundred carefully footnoted pages and constitute the bulk of the book—have been updated and expanded to reflect new insights or evidence since the report was initially released.

“In fairness to all parties, some of the historians, researchers, writers, and freelance controversialists to have weighed in on the question have made significant contributions to our knowledge of an understandably sensitive subject. Robert F. Turner in his meticulous and fair-minded 'The Jefferson-Hemings Controversy,' for example, does yeoman service poking holes in some of the claims of what might be regarded as the pro-Sally school, from Fawn Brodie to Annette Gordon-Reed. Turner's is a long-overdue corrective, worthy of respect and serious consideration.” — Fredericksburg.com, Alan Pell Crawford, author, "Twilight at Monticello: The Final Years of Thomas Jefferson"

“...the report provides a valuable documentary history, useful as much for what it suggests about the Jefferson-Hemings controversy as for its value for historiographical analysis. Summing Up: Recommended. For all research libraries, lower-level undergraduate and above.” — J.D. Smith, CHOICE Magazine April 2012, University of North Carolina at Charlotte