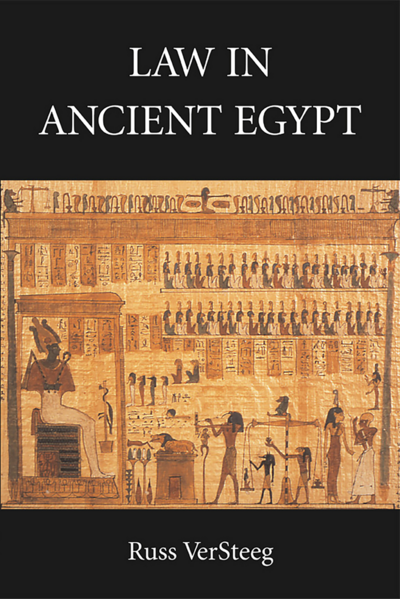 Law in Ancient Egypt examines the legal philosophy, legal institutions, and laws of the ancient Egyptians. Ancient documents, accounts, and literature provide the basis for a wide perspective of law and the Egyptian legal system. VerSteeg delineates and analyzes the elements of Egyptian law, explaining how social, religious, cultural, and political forces shaped both the procedural and substantive aspects of law.

Part I considers the theory of justice in ancient Egypt, exploring the role of law in society. Part I also traces the development of the judicial system distinguishing the various types of judges, courts, and procedures that were employed to make justice available to all. Part II reconstructs the substantive laws of the ancient Egyptians, including chapters detailing property, family law, inheritance and succession, tort and criminal law, contracts, and status. Land records, wills, sales documents, court chronicles, works of ancient fiction, and accounts of ancient trials illustrate the sophisticated, often subtle, and complex nature of law in ancient Egypt.

This study provides an introduction to law in ancient Egypt. It is the first comprehensive overview of the subject written from the perspective of someone trained as an American lawyer who is also sufficiently familiar with the discipline of Egyptology. The book will be of interest to Egyptologists, legal historians, law students, and educated non-specialists who are interested in the interaction of law, history, and ancient culture.