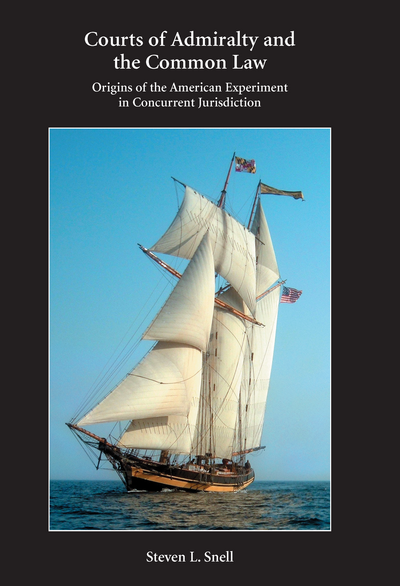 Courts of Admiralty and the Common Law (Paperback)

Origins of the American Experiment in Concurrent Jurisdiction

This is the 2018 paperback printing of the hardback published in 2007.

Courts of Admiralty and the Common Lawexamines the origins of American admiralty jurisdiction. Drawing from a vast array of primary sources, ranging from Roman law to English records of the medieval and early modern periods, the author traces the development of English admiralty practice that provided the legal heritage of the new American nation. The book provides details of how the English High Court of Admiralty and its civil-law practitioners became embroiled in the struggle between Crown and Parliament in the seventeenth century, losing much of their traditional jurisdiction to the courts of common law at a time when the American colonies were just beginning to establish specialized tribunals for hearing maritime cases. With maritime jurisdiction in flux in the mother country, the Americans were free to adopt ad hoc solutions to the problem of jurisdiction, creating a system in which both the colonial common-law courts and the newly established colonial vice admiralty courts had concurrent power to adjudicate a wide range of maritime claims.

Courts of Admiralty and the Common Law also sheds fresh light on the origins of the federal judiciary, showing how the debate over maritime jurisdiction was instrumental both in shaping the language of Article III of the Constitution and later in determining the structure of the federal courts in the Judiciary Act of 1789. Building upon an assortment of materials from the Constitutional Convention, the states' ratifying conventions, and other contemporary sources, the author explores the pivotal role that the debate over maritime jurisdiction played in determining the structure of the federal courts and explains the reasons underlying the first Congress' decision to grant concurrent jurisdiction over some maritime cases to the states' courts of common law.

When the first Congress incorporated concurrent state/federal jurisdiction over several classes of maritime claims into the Judiciary Act of 1789, the author argues, it had not created a novel jurisdictional system, but merely had preserved the status quo established long ago in the colonial era. Congress had disregarded the dangers usually associated with two separate sets of courts interpreting the same body of substantive law, assuming that the lex maritima, as part of the law of nations, would be applied uniformly in both state and federal courts. Soon, however, both new technology, such as the introduction of steam power in maritime commerce, and changing views regarding the law of nations would challenge that assumption. As the original reasons for granting concurrent jurisdiction unraveled, American judges in the early nineteenth century sought to make overlapping jurisdiction work in a changing world. Courts of Admiralty and the Common Lawconcludes with an assessment of whether concurrent state/federal maritime jurisdiction continues to serve a practical purpose in the twenty-first century, examining how tensions between conflicting state and federal substantive rules may serve the greater interests of federalism and commerce.

"Through his thorough account of the shipping industry's rise and fall and of the challenges admiralty jurisdiction posed to ideas about federalism, Professor Snell shows how commerce influenced the development of our unique governmental structure." —Harvard Law Review

"For those with an interest in the development in American courts of a distinct jurisdiction in cases sufficiently related to waterborne transport, this book should fit neatly between that of Prichard and Yale on the one hand and Robertson on the other. It is more comprehensive in research and perspective, synthetic in process, and thematic in design than the former. It offers more evidence than the latter and it addresses controversies that have ripened since 1970." — Journal of Maritime Law and Commerce