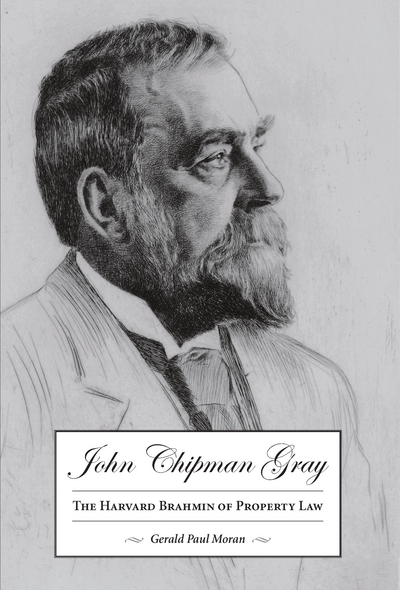 The Harvard Brahmin of Property Law

John Chipman Gray plays an unusual role in the study of the law of property. The impact of his scholarly effort continues today from and through the prism of his defining scholarship on the historical origin of the so-called enigmatic Rule against Perpetuities (RAP). His book on the RAP, first published in 1886, became the most authoritative guide on this decidedly complex inheritance of the English common law. His formulaic condensation of the RAP became a foreboding juggernaut for law students to comprehend for more than a century.

His scholarship and enduring hegemony on the interpretation and aggressive enforcement of this sacrosanct RAP of property law eventually led to the demands for elimination of some of the excesses of his ensconced articulation of the RAP during the latter part of the Twentieth Century. Most of that action was foreordained by the highly critical and equally humorous scholarship of Professor W. Barton Leach. It was only a matter of time before the academy agreed to provide some revision to lessen the harshness of Gray's RAP by action of the American Institute of Law and then later by the National Conference of Commissioners.

All of these factors led the author into the study of the life and career of John Chipman Gray. He was without doubt one of the Giants of the Harvard Law School during the period when the metaphysical structure of the traditional modern American law school were designed and implemented. The personal experiences and the cultural influences on Professor Gray greatly shaped his perception of the role and function of law in society. Professor Gray was not just a law professor and scholar extraordinaire, but also a founding member of one of the most prestigious law firms of the country—Ropes & Gray—as well as a quintessential Brahmin. He was also directly involved in the Civil War and a half brother of Justice Horace Gray, Jr. These factors reveal an uncommon man passionately engaged in matters of the public forum, who oddly did not seek notoriety, and was at his core a very private person.

Lastly, the book provides a special chapter designed to reduce some of the mysticism generally associated with the study of the RAP for students of today.

"The name 'John Chipman Gray' has evoked terror in generations of attorneys… Gray's famous Rule now lays gravely ill, the victim of an admirable desire for efficiency and a less-than-admirable desire of wealthy clients to reach for immortality, of lawyers and trust companies to make money by abetting them, and by state legislatures happy to race to the bottom. Gerald Moran tells the story of the Rule with verve, but goes far beyond that. His book is a fascinating guide to a towering figure of a formative period in American law. It also has astute observations about the manners, mores, and intellectual climate that shaped our times. I recommend it to lawyers and general readers alike." — Steven J. Eagle, Professor of Law, George Mason University School of Law

"As Professor Moran describes (and as generations of law students came to learn), Gray is the Rule Against Perpetuities. Moran's biographical essay elegantly traces the personal, family, cultural, social, and professional influences that worked to shape Gray's approach to the Rule. He thoroughly describes the obvious tension (indeed, contradiction) between Gray the inchoate Realist lawyer and Gray the successful academic purveyor of arid conceptualism. His exploration usefully demonstrates the central importance of the relationship between legal rules and the character and personalities of those who devise and explain the rules. Moran lucidly shows the degree to which the ideology that shapes legal rules is in turn shaped by the personalities and experience of the rule-makers. The result is a thoughtful and thought-provoking exploration of the life, character, and times of an important scholar whose doctrinal influence still endures. Moran's insightful and sympathetic discussion of Gray's life and of the influence of that life on legal doctrine is an important and valuable contribution to our own understanding of how legal doctrine develops." — Charles G. Hallinan, Professor of Law, University of Dayton School of Law

"Moran's biographical essay succeeds in capturing the relationship between John Chipman Gray's life experiences and his most notable contributions to property law — the Rule Against Perpetuities. … [I]ndividuals seeking either a comprehensive discussion of the RAP or an understanding of John Chipman Gray will benefit from this work." — The Law and Politics Book Review