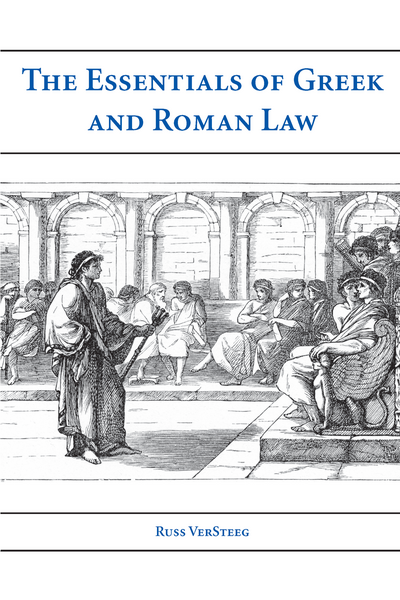 The Essentials of Greek and Roman Law

Countless books detail the development of Roman law and explain the laws of the ancient Romans. Similarly, many scholars have traced the law of ancient Athens. Written for both students and educated lay readers, the chapters dealing with ancient Greece focus primarily on the law of ancient Athens in the 5th and 4th centuries B.C.E. But material relating to other Greek colonies and city states also plays a significant role in the development of ancient Greek law. The Roman law chapters explore both law and legal institutions and emphasize the growth and expansion of legal principles. Roman law still serves as the foundation for the civil laws of many nations today. And given the importance of globalization, Roman law is likely to continue to influence the modern word for the foreseeable future.

Each unit begins with a "Background & Beginnings" chapter that establishes the historical context in which law developed and introduces relevant principles of jurisprudence (i.e., legal philosophy). The second chapter in each unit covers procedural aspects of the law, such as court structure, judges, trial procedure, evidence, and legislation. The remaining chapters examine substantive legal topics such as property, contracts, family law, criminal law, and the like.The text also maintains a focus on the connections and influences of social, cultural, economic, philosophical, and political forces as they have affected law and its development.

In addition, several sections of the book add another dimension. These sections, entitled "Law in Literature," use works of ancient literature to explore aspects of law as seen through the eyes of poets, dramatists, orators, and historians. In theory, modern readers can learn a great deal about law through literature because literature often lacks the "official filter" of many traditional legal sources.Of course each individual author brings his own biases about law and the legal system to his writing. But as long as we acknowledge the potential for such bias, these sections have the potential to offer completely different perspectives and insights.