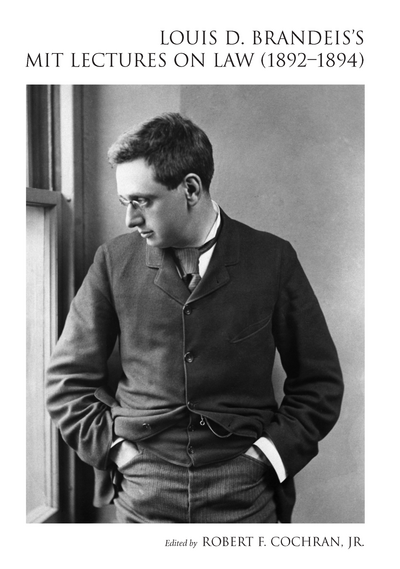 Between 1892 and 1896, Louis Brandeis taught a course on law to undergraduates at MIT. At that time, Brandeis had been practicing law for 15 years, was head of one of the most successful law firms in the country, and had begun the public interest advocacy for which he would soon earn the title “The People’s Lawyer.” A few years earlier, he had published the Harvard Law Review “Right to Privacy” (1890) article later identified by William Prosser as the most influential law review article.

In Brandeis’s opening course lecture, he argues that knowledge of the law is “an essential part of a liberal education” and “of great practical value to men engaged in active life.” In the lectures, Brandeis presents his views of areas of law in which he would lead the country over the next five decades as activist lawyer and Supreme Court justice—anti-trust, labor, privacy, criminal procedure, legal ethics, legislation, evidence, the judicial role, and jurisprudence. In some areas, we see the foundations of Brandeis’s later work. In others, we find Brandeis taking positions that were the opposite of those he would take in the future. We see a mind at work and a mind in transition. Twenty years later, reflecting on the course, Brandeis said, “Those talks at Tech marked an epoch in my own career.”

“The lectures provide much depth and insight into Brandeis’s view of the law, and Cochran’s excellent introductory essay provides a crucial understanding of their significance. …The value of Louis D. Brandeis’s MIT Lectures on Law (1892-1894) comes from its providing the reader a glimpse into the mind of one of our greatest Supreme Court justices and pointing to his continued relevance today in a world still mired in many of the same issues present in Brandeis’s day.” — R. Mark Frey, The Federal Lawyer