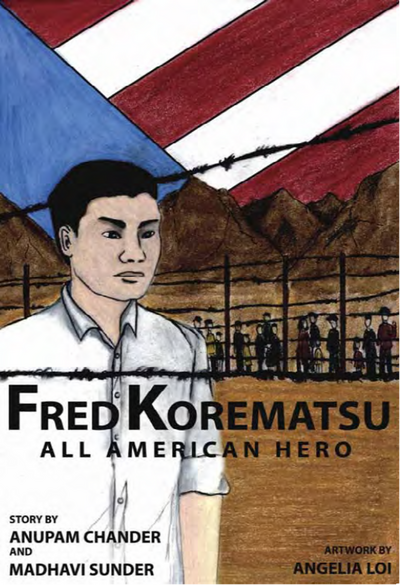 Our hero is mild-mannered Fred Korematsu, an ordinary welder working in a shipyard who transforms into a champion for more than a hundred thousand people.

This story follows Korematsu from his all-American childhood in Oakland, California, to his role as a young man in challenging the Internment, to his reopening, as a man in his sixties, the very case he had lost before the Supreme Court of the United States in 1944.

"This comic book appeals to both children and young adults, with a very important message delivered within. The story highlights the courage and persistence shown by a young Fred as he challenged the Japanese Internment when his family was ordered to a camp in CA during World War II and continued the battle as an older adult. His determination and final success in spreading the message 'If you have the feeling that something is wrong, don't be afraid to speak up' is one that must be brought home to young readers of today at a time when we are remembering the 10th anniversary of the horror of 9/11. The authors remind us in the opening pages that, like the Japanese families in WWII, Muslim families in America face the fear of discrimination based on religion and race. Young people need more books like Fred T. Korematsu, All American Hero, written in an engaging format to educate them and assure them that one person can make a difference!" — Cheri Olmstead, 4th Grade Classroom Teacher, Davis, California

"This comic book about Fred Korematsu and the lessons of his struggle is a brilliant effort to reach a broader audience. By telling and retelling history in ways which resound with Americans and connecting history to the present, this book is not comic except in design: it offers serious educational value for anyone who reads it." — Dale Minami, Civil Rights Attorney and Lead Attorney on Korematsu Coram Nobis Team

"This is a remarkable publication that provides a history lesson for people of all ages about American hero, Fred Korematsu, who challenged the injustice of internment during World War II and remains an inspiration to all who are victims of misguided government policies and racism.

This amazing, accessible children's book is a moving account of the life of Fred Korematsu who stood up to the injustice of internment during World War II. Parents should read this book with their children and experience the life of a true American hero who continues to inspire. The book has particular salience in our post 9/11 world where racism and profiling rear their ugly heads too often.

Fred Korematsu's amazing 40-year battle that unearthed the lies that led to the wrongful internment of Japanese Americans during World War II is depicted brilliantly in this comic book. It serves as an inspiration to all of us—young and old—to stand up to injustice and reminds us that the constitution is for all Americans." — Bill Hing, Professor at the University of San Francisco School of Law

"At a time when the general public is finally beginning to see the deadly consequences of bullying in schools, this book helps children embrace our differences, speak out against injustice, and better understand the diversity that strengthens this country." — Ling Woo Liu, Director, Fred T. Korematsu Institute for Civil Rights and Education

"In the long history of our country's constant search for justice, some names of ordinary citizens stand for millions of souls — Plessy, Brown, Parks. To that distinguished list today we add the name of Fred Korematsu." — President Bill Clinton on awarding the Presidential Medal of Freedom to Fred Korematsu