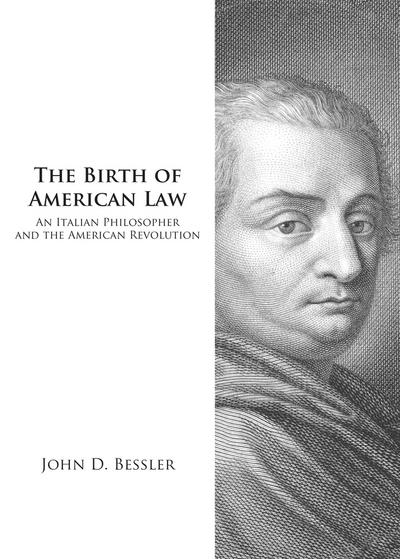 The Birth of American Law

An Italian Philosopher and the American Revolution

The Birth of American Law: An Italian Philosopher and the American Revolution tells the forgotten, untold story of the origins of U.S. law. Before the Revolutionary War, a 26-year-old Italian thinker, Cesare Beccaria, published On Crimes and Punishments, a runaway bestseller that shaped the Declaration of Independence, the U.S. Constitution, and early American laws. America's Founding Fathers, including early U.S. Presidents, avidly read Beccaria's book—a product of the Italian Enlightenment that argued against tyranny and the death penalty. Beccaria's book shaped American views on everything from free speech to republicanism, to "Life, Liberty and the pursuit of Happiness," to gun ownership and the founders' understanding of "cruel and unusual punishments," the famous phrase in the U.S. Constitution's Eighth Amendment. In opposing torture and infamy, Beccaria inspired America's founders to jettison England's Bloody Code, heavily reliant on executions and corporal punishments, and to adopt the penitentiary system.

The cast of characters in The Birth of American Law includes the usual suspects—George Washington, Thomas Jefferson, John Adams and James Madison. But it also includes the now little-remembered Count Luigi Castiglioni, a botanist from Milan who—decades before Alexis de Tocqueville's Democracy in America—toured all thirteen original American states before the 1787 Constitutional Convention in Philadelphia. Also figuring in this dramatic story of the American Revolution: Madison's Princeton classmate William Bradford, an early U.S. Attorney General and Beccaria devotee; John Dickinson, the "Penman of the Revolution" who wrote of Beccaria's "genius" and "masterly hand"; James Wilson and Dr. Benjamin Rush, signers of the Declaration of Independence and fellow Beccaria admirers; and Philip Mazzei, Jefferson's Italian-American neighbor at Monticello and yet another Beccaria enthusiast. In documenting Beccaria's game-changing influence, The Birth of American Law sheds important new light on the Constitution, the Bill of Rights, and the creation of American law.

The Birth of American Law was awarded the 2015 Scribes Book Award and the First Prize in the 2015 AAIS Book Award competition (in the 18th/19th century category). It was also named INDIEFAB's 2014 Gold Winner for History!

"… Bessler's new magisterial study of Beccaria's work and its influence on American revolutionary-era thinking […] is well worth the effort of many hours of reading.… Although generally known today, Beccaria's treatise is less familiar than in the past. Bessler's spellbinding account of the volume's life and influence could not have come at a better time."
—Russ Immarigeon, Journal of Community Corrections

"The Birth of American Law bears distinction to other well received works on the founding of the nation because it demonstrates the transition from enlightenment political philosophy to criminological theory, a natural jump best exemplified by the link drawn by Beccaria and other theorists between the end of authoritarian rule, the end of torture and a more rational approach to punishment."
—Leona D. Jochnowitz, Criminal Law Bulletin

"The depth of The Birth of American Law is as impressive as its title suggests, although its scope is somewhat narrower. Bessler explores the influence on the Founders, and on subsequent American legal thought, of Cesare Beccaria, a late-18th century Italian Enlightenment writer and one of the earliest prominent European death penalty opponents. […]In this meticulously researched, footnoted, and indexed volume, Bessler argues that Beccaria's views influenced the thought of many of the statesmen who formed the American Republic, and continued to reverberate through the development of American criminal law well into the 19th century."
—Christopher J. Peters (University of Baltimore School of Law), The Champion

"John Bessler's newest book gives us a wonderful resource for increasing our appreciation for Beccaria and his many time-tested contributions. The book serves as a powerful reminder that as we design the American criminal justice system for the next generation, a look back to the novel ideas of 250 years ago can still help to show us the path."
—Michael L. Radelet, Criminal Justice Review"

"In 1948, Daniel Boorstin published a book called The Lost World of Thomas Jefferson. Six decades later much about the Founding Generation's intellectual world remains almost unknown to contemporary scholars, lawyers, and judges. John Bessler has performed an important service in reminding us of the influence of Cesare Beccaria on the dialogue around the Constitution and the Bill of Rights. In so doing, he has opened up new vistas of meaning that Americans ignore at our peril."
—Garrett Epps, author of American Epic: Reading the U.S. Constitution

"Professor John Bessler has gathered the criminal law and other significant writings of the eloquent Italian Enlightenment scholar Cesare Beccaria (1738–1794). Bessler shows how Beccaria's philosophy fits with contemporaneous thinking of Bentham, Blackstone, Hume, Locke, Montesquieu, Rousseau, and Voltaire, and how he influenced American founders such as John Adams, Benjamin Franklin, Alexander Hamilton, John Jay, Thomas Jefferson, James Madison, and George Washington. As a leading current opponent of the death penalty in the United States, Bessler shows how Beccaria was among the earliest opponents of capital punishment, as well as a critic of torture, corporal punishment, retributive punishment, pretrial detention, and other problems of criminology."
—David Weissbrodt, Regents Professor of Law, University of Minnesota

"The Birth of American Law recovers the role that Cesare Beccaria played in the development of American ideas about crime and punishment. John Bessler illuminates how Beccaria, a leading theorist of the Italian Enlightenment, influenced such American lawyers and founders as John Adams and Thomas Jefferson. He also reminds us that the United States and its law developed not in exceptional isolation but in a trans-Atlantic context of ideas and argument. Bessler and Beccaria have much to teach us; even those finding points of disagreement will benefit from reading this book."
—R. B. Bernstein, City College of New York, author of Thomas Jefferson and The Founding Fathers Reconsidered

"John Bessler masterfully and comprehensively traces how Cesare Beccaria's On Crimes and Punishments deeply affected early American views on crime and the proportionality of punishments for crime. Just as John Adams gifted Beccaria's treatise to his sons, John Bessler has gifted Beccaria to a new generation of Americans. Researchers and scholars interested in exploring Cesare Beccaria's influence on our nation's Founders will rely on this volume for generations to come."
—Julie Silverbrook, Executive Director, The Constitutional Sources Project

"The literature on the Founding Fathers and the birth of the United States of America is voluminous, as is scholarship on the death penalty in America. In this book, though, John Bessler makes unique and important contributions to both subjects by demonstrating the indelible influence that an Italian philosopher—Cesare Beccaria—had both on the Founders and on anti-death-penalty discourses. [...] The Birth of American Law, which is rich in detail and meticulously researched, can be described as part biography of Beccaria, part legal history of the Founding era, and part searing indictment of capital punishment. [...] While many students of the Revolutionary era will be familiar with the likes of Jefferson, Franklin and Adams, and while many students of capital punishment will be familiar with Beccaria's scathing critique of the death penalty, Bessler merges these two stories into a compelling account of the beginning of the American legal order, making The Birth of American Law a must-read for anyone interested in the origins of the US legal order."
—Bharat Malkani, Journal of American Studies, Volume 49

"[...] A rich resource for scholars examining the intellectual origins of the American project conceived broadly."
—Matthew Taylor Raffety, The Journal of Southern History

"Professor Bessler's The Birth of American Law offers a contribution to the research on Cesare Beccaria of extraordinary value for legal historians and for legal scholars in general. Not only is the book extremely fascinating, but it gives an enormous mass of information about the "celebrated Marquis" and his influence on the developments of the law and the legal jurisprudence in Europe and outside Europe over the last 250 years."
—Alberto Cadoppi, University of Baltimore Journal of International Law