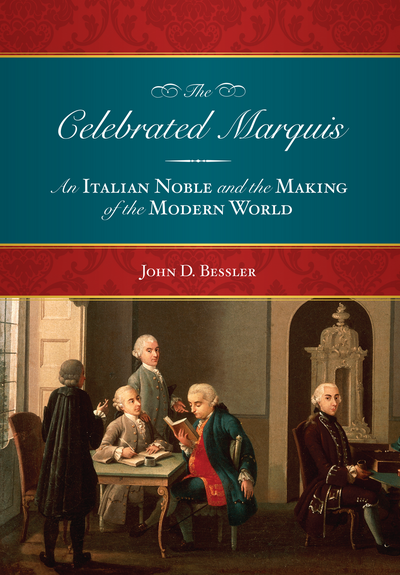 The Celebrated Marquis: An Italian Noble and the Making of the Modern World

An Italian Noble and the Making of the Modern World

During the Enlightenment, a now little-known Italian marquis, while in his mid-twenties as a member of a small Milanese salon, the Academy of Fists, wrote a book that was destined to change the world. Published anonymously in 1764 as Dei delitti e delle pene, and quickly translated into French and then into English as On Crimes and Punishments, the runaway bestseller argued against torture, capital punishment, and religious intolerance. Written by Cesare Beccaria (1738-1794), an economist and recent law graduate of the University of Pavia, On Crimes and Punishments sought clear and egalitarian laws, better public education, and milder punishments. Translated into all of the major European languages, Beccaria's book led to the end of the Ancien Régime.

Praised by Voltaire and the French philosophes, Beccaria was toasted in Paris in 1766 for his literary achievement, and his book—though banned by the Inquisition and placed on the Catholic Church's Index of Forbidden Books—was lauded by monarchs and revolutionaries alike. Among its admirers were the French Encyclopédistes; Prussia's Frederick the Great; Russia's enlightened czarina, Catherine II; members of the Habsburg dynasty; the English jurist Sir William Blackstone; the utilitarian penal reformer Jeremy Bentham; and American revolutionaries John Adams, Thomas Jefferson, and James Madison. On Crimes and Punishments, decrying tyranny and arbitrariness and advocating for equality of treatment under the law, helped to catalyze the American and French Revolutions. In 1774, on the cusp of the Revolutionary War, the Continental Congress explicitly hailed Beccaria as "the celebrated marquis."

Called the "Italian Adam Smith" for his pioneering work as an economist in Milan, Cesare Beccaria—like his Italian mentor, Pietro Verri—wrote about pleasure and pain, economic theory, and maximizing people's happiness. Once a household name throughout Europe and the Americas, Beccaria taught economics before the appearance of Smith's The Wealth of Nations but died in obscurity after working for decades as a civil servant in Austria's Habsburg Empire. As a public councilor, Beccaria pushed for social and economic justice, monetary and legal reform, conservation of natural resources, and even inspired France's adoption of the metric system. In The Celebrated Marquis, award-winning author John Bessler tells the story of the history of economics and of how Beccaria's ideas shaped the American Declaration of Independence, constitutions and laws around the globe, and the modern world in which we live.

"The Celebrated Marquis: An Italian Noble and the Making of the Modern World is a superbly presented work of extraordinary scholarship and an essential, unreservedly recommended addition for community, college, and university library collections." — Midwest Book Review

"A biography examines the 18th-century jurist Cesare Beccaria. Beccaria, born in Milan in 1738, was the eldest son of an Italian aristocrat. Educated by Jesuits, the young noble went on to study law at the University of Pavia, emerging as a prominent man during the Age of Enlightenment. Although his name is not as well-remembered as Voltaire and Adam Smith, Beccaria made his own share of contributions to the advancement of modern thinking. As Bessler explains, this book seeks to 'restore Cesare Beccaria's rightful place in the pantheon of the world's most influential historical figures.' The main argument for Beccaria's impact is his slender, though widely read, work published in 1764: Dei Delitti e delle Pene (later translated into English as On Crimes and Punishments). His book argues against the use of torture and the death penalty in favor of more rational means for punishing criminals…Bessler argues that Beccaria's work shaped not just European minds, but also many of the key figures of the American Revolution, including Dr. Benjamin Rush, who was an 'undying and fervent Beccaria disciple.' Beccaria's influence on the Enlightenment and American jurisprudence is an intriguing and engrossing historical trial to follow. The Founding Fathers did not create their own works out of thin air. Following the accomplishments of a lesser-known figure like Beccaria becomes a rewarding exercise for the audience. In skillfully sorting out the many ideas that led to documents with as much longevity as the Constitution, the author shows readers how much thought went into concepts that many take for granted." — Kirkus Reviews